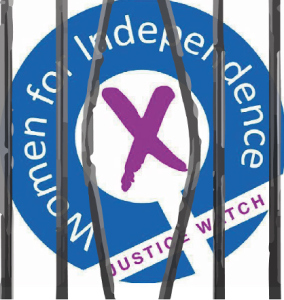 In this blog, I am going to write about not just my own experience and views but also cover some of the issues that we all have encountered and the experiences of women in a number of courts.

Readers who have not been in a criminal court will have seen film and TV court scenes. In these the public gallery can hear everything clearly and understand it too.  But its not like that at all. Those who have been in an actual court will probably have had a different experience.

So picture this.  The business of the court is conducted in a sort of cockpit of black gowned lawyers and clerks, all sitting round a big set of tables heaped with files and papers.  The Sheriff, wearing a gown and a woolly wig of ladies’ perm-like curls, literally sits above the rest of the court on a raised dias, facing out towards the whole court with only the head and shoulders visible.

Immediately below and in front of the sheriff sits the court clerk, also facing out to the court, and to their side is the procurator fiscal (public prosecutor) and then there are the defence solicitors. Those in the cockpit all sit facing each other and the sheriff. The witness box is part of this in the line of sight of sheriff, clerk, fiscal and defence.  So they will mostly have their backs to the public gallery. And this means that they usually have their backs to the defendants too, but more of the defendants’ experiences later.

We set out to watch justice.  One thing we have all found is that justice is nearly impossible to hear from the public gallery. There does not seem to be an expectation that anyone in the public gallery should be able to hear what is being said. So watching justice is proving a bit difficult for everyone, but especially for those of us who don’t have good hearing.

Women in Glasgow Sheriff Court have tackled this actively. First of all they were offered earphones to be able to access the induction loop system. After ensuring that these were hygienically clean – not something that had occurred to the court staff – it was discovered that they did not work anyway. If the court is using the speaker system at all, it still it is not amplified beyond the very closed circle in front of the sheriff. But often it is not used at all.

Women have found the same problem in other courts so this is not particular to Glasgow.

But in addition to not being able to hear clearly, there is also the impenetrability of court processes. Often people will be called or brought into the dock and dealt with as if the matter was of no interest to anyone other than the charmed close circle. It seems that people accused of crimes are not expected to take any part in their own cases,  apart from to agree their name and address. They sit with their backs to the public gallery, facing the sheriff but still not part of or very close to the cockpit of activity.

Why does this matter?

If justice is supposed to be ‘seen to be done’ it should be audible, and it should also be clearly understandable.  Most of the people in the public gallery are relatives and friends of the accused, or are waiting for their own case to be called.  The public gallery is mostly left in the dark about what is happening as people are brought or called into the dock and then issued with bail conditions, given a date for a further hearing. So much clearer, and  audible proceedings would be really useful for everyone.

The accused – seen but not heard?

Attempts by the accused to take part in any discussion of their own case or circumstances are firmly squashed. While it is understandable that there needs to be a proper process, and that the rules of court are followed so that there is not any heckling, dispute or other intervention by the accused while a trial is in process.

But what we have seen is people in the dock trying to alert their solicitor – who they may not had any discussion with since some months before – that their circumstances are not as being described, or some other matter. Often it seems that the accused is the only one of the various parties who actually has the correct understanding of where things are.  Attempts by the accused to set the record straight about factual matters are firmly squashed. Sometimes the defence solicitor will ask permission to go over to their client in order to have a muffled conversation (which funnily enough are often audible to the public gallery) and then go back to announce the facts to the court as if they had been given to him by divine revelation.  Certainly not by the accused. The court then proceeds ignoring the accused until the very end of deliberations when a decision is announced.

How are we collecting information about women in court

When we first started we did have an idea that we would be watching cases, and would be able to get a coherent story about what happens to women in our courts. We have certainly seen evidence of poverty and of ill health. We have also seen how inefficient and wasteful our courts are, and what a narrow way they operate.  The real lives and troubles of the people in the dock are not taken account of. If a young woman with a learning difficulty breaks a bail condition which she can not understand or comply with she is arrested, held in the cells, brought up to the dock – all without being asked what the problem was, and how to solve it.   So the police, the  court and the procurator fiscal and the defence solicitor can all ignore the real problem, the reality that is staring them in the face.

We have had all sorts of discussions about how to capture what we are watching in the courts, and what we are hearing from women and members of the public, and solicitors and police in the corridors and outside areas.

We now have two simple forms, one for capturing issues in the actual court room, and the other for capturing discussions and encounters, and just describing and explaining what we have experienced on our visits to court.

And here they are! Please take a morning or afternoon to visit your local court and let us know what you found and what you think of it.