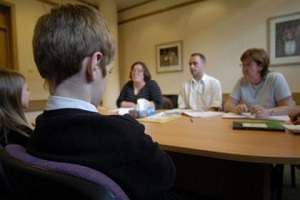 Maggie Mellon reports on ‘Where’s Kilbrandon Now?’, the inquiry into the future of the Scottish children’s hearing system.

Child Justice in Scotland is based on a system of hearings held by panels .It was established in 1968, in response to a report by Lord Kilbrandon, a senior Scottish laws lord. In recent years the hearings system has come under criticism for being ‘too soft’, and there have been calls to take child justice back to the courts.

Out dated? Too soft? Over-burdened? Underresourced? These were some of the questions that NCH Scotland posed in our inquiry into the future of the children’s hearings system in post-devolution Scotland.

The hearings system, established 30 years ago in the wake of the Kilbrandon report, reflected a forward-looking and confident civic Scotland, willing and able to take a radical and informed approach to ‘delinquent’ and deprived children and young people.

The system takes decision-making about children out of the courts and into the hands of a lay volunteer panel. Only questions of fact, if disputed, are settled in court. The hearings provide the potential for a multi-disciplinary approach to children’s needs and deeds — and are admired internationally.

However, devolution has brought with it a lot of internal questioning and criticism of some of Scotland’s previously treasured ‘great institutions’ and the hearings, like our education system, have come in for their share of this critical attention. How we deal with young people in trouble is once again back on the agenda and some change seems
inevitable.

But this is not the 1970s and the political mood seems both punitive and impatient. Political and media criticism often seemed to lump together failings in performance with failure of principle. Our concern and that of many children’s agencies is that the Scottish Parliament should not throw the baby (or indeed any children and young people) out with the bathwater. Is it the system itself that is wrong or the way we run and resource it? That is one of the key questions that we wanted to address with our Kilbrandon Inquiry

One of the problems we recognised was that the hearings have been somewhat wrapped in cotton wool. The protective instincts of the various ‘keepers’ of the system, (18 years of which were under Conservative governments) have indeed preserved the system, but at a cost. There was very little evaluation of what actually happened at hearings, and how and why decisions were made. Did children and young people and their families feel consulted? Was there clarity about rights and responsibilities? There was even less evaluation of outcomes – what happens during home supervision orders? What happens to children taken away from home on residential supervision orders? Is secure care necessary for all the children who are authorised for this extreme measure? Why do so many young men go straight from the hearing system to the adult courts and then often straight to jail at the age of only 16 or 17?

An independent panel has been appointed to review the evidence and to report on the best way forward for children’s hearings and the youth justice system. It is chaired by Richard Holloway, the former Bishop of Edinburgh, and also includes Ruth Wishart, well known broadcaster and journalist, Professor Tom Devine, a leading Scottish historian, and Kaliani Lyle, chief executive of Citizens Advice Scotland.

All of these individuals command widespread respect and their collective moral and intellectual authority will lend great weight to their final recommendations. The panel heard from a fascinating and informed array of witnesses during a day long session of public evidence on September 5. Professor Fred Stone, an original Kilbrandon committee member, gave an insight into their deliberations and their vision of a vibrant, creative and responsive system. His view was that on reflection, on-going evaluation and change should have been built into the system from the start. Other witnesses included Barry Goldson of Liverpool University, who spoke of the 100% rise over the last ten years of under 18 year olds in custody in England, and the even more stark 800% increase in imprisonment of 12-14 year olds. Dr Ido Wiejers of Utrecht University outlined the reasons for dealing with adolescent offenders in separate systems and in different ways than with adult offenders, and of the importance and possibilities of engaging even the most hard to reach families in the process of change. Other witnesses included David Strang, for Scotland’s Association of Chief Police Officers, who spoke of police support for the hearings’ work with most children and young people, but of their concern that this failed with a small minority whose offending went unchecked.

John Scott, a solicitor advocate in the criminal courts, said that if someone had set out to design and manage a system that would perpetuate offending and anti social attitudes in young people they could not have done better than invent our current court system.

Some of the most moving and interesting contributions came from young people from Stirling, Glasgow, Renfrewshire, Ayr and Greenock. Some felt that the panel members were remote, but others praised a system that had given them ‘a chance’ that other young people should have too. A young man from Who Cares? recounted how he had come into care because of abuse at home but had quickly been written off as a young offender. Many complained that the system was not ‘firm enough’ with them. One young man described going through years of attending hearings for offending, and ‘nothing happening’, then suddenly being dumped in an adult court at age 16 and being sent straight to the jail. It has all been fascinating material for our panel who meet again soon to review the transcripts and prepare their report.

Our first minister has announced that he is impatient for change but open to ideas. We hope that the recommendations of the panel will make sure that any change is solely change for the better – for young people and for Scotland as a whole. Further information and a full transcript of the hearing can be found on www.nch.org.uk/kilbrandonnow

Maggie Mellon, NCH Scotland, was an adviser to the ‘Where’s Kilbrandon Now?”Inquiry