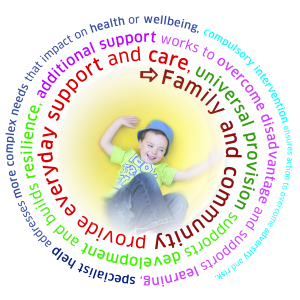 Supporters of the Named Person (NP) scheme, who relied mainly on assurances given by the Government and NP’s architects and supporters, might have been surprised by the Supreme Court’s unanimous ruling that the law needed to be dropped or substantially revised. It was, however, not the assurances that were the subject of the challenge and the Supreme Court ruling. Why the Government and its supporters chose not to refer themselves and us to the wording of the Act is for them to explain, but anyone who remains in any doubt that they have been misled should read the relevant parts of the Act, the Guidance and the Supreme Court judgement.

To start, here are the relevant extracts from the Children and Young People Act (Scotland) 2014 (CYP(S)2014):

That all children under the age of 18 years in Scotland, apart from those in the armed forces, are to have a ‘Named Person’ appointed by ‘service providers’ (emphasis in italics added below)

(5) The functions (of the Named Person)

(a)…. doing such of the following where the named person considers it to be appropriate in order to promote, support or safeguard the wellbeing of the child or young person—

(iii) discussing, or raising, a matter about the child or young person with a service provider or relevant authority….

(1) A service provider or relevant authority must provide to the service provider in relation to a child or young person any information which the person holds which falls within subsection (2).

The information-sharing duties and powers and the accompanying Draft Statutory Guidance on parts 4 and 5 were at the heart of the Court’s ruling. The duties and powers were about ‘any concern’ about ‘any aspect’ of the life of any child in Scotland. The potential dangers of the power of information-sharing on this scale about the private lives of children and families in Scotland should be clear to anyone reading the Act. Prior to the ruling, the public was categorically assured by the First Minister, the Deputy First Minister, MSPs of Green, Labour and SNP parties, and assorted charity leaders, directors, other cheerleaders that the NP scheme was voluntary and benevolent, and posed no risk at all to private and family life.

The Scottish Parliament and then two Scottish courts had failed to give any weight to the advice by the Faculty of Advocates, the Law Society, the Scottish Parent and Teacher Council, several leading law professors, and of the No2NP campaign and others, that the scheme would breach ECHR Article 8 rights to private and family life and the consequent provisions of the Data Protection Act.

Even now, supporters of the scheme still insist that the Court ruling is merely a technical glitch. John Swinney and others claim that the Supreme Court declared the NP scheme benevolent. The Supreme Court did comment that Parliament’s intentions were benevolent and legitimate. However, intentions were not part of the legal challenge. In court, the Government’s representatives argued that the information sharing powers and duties were ‘essential’ to implementation. On the basis of its own case, the ruling means that the NP scheme cannot be implemented.

The Supreme Court spelled out the dangers of the unlimited duty to share information without consent, or without the justification of necessity and criticised the lack of definition of ‘wellbeing’. Their judgement warned of the dangers of the legislation:

The first thing that a totalitarian regime tries to do is to get to the children, to distance them from the subversive, varied influences of their families, and indoctrinate them in their rulers’ view of the world. Within limits, families must be left to bring up their children in their own way.

The court wasn’t describing Scotland today as totalitarian, but warning of the dangers of legislation that encourages compulsory, unfettered intrusion into family and private lives by public officials as they or others ‘consider to be appropriate’.

This is not a technical issue at all, but a fundamental human rights breach. Councils which were operating the NP scheme have been doing so on the basis of the Draft Guidance that information should be shared with or without consent. Many children already have records that may act as millstones round their necks for the rest of their lives. That in itself makes the judgement a victory for human rights and a vindication of the ECHR. It’s a pity that so many guardians of liberty in Scotland failed to oppose the Act. It is for them to explain why.

There are wider objections to ‘Getting it Right for Every Child’ (GIRFEC). A direct line can be drawn from GIRFEC to the English ‘Every Child Matters’ policy and to the USA’s ‘No Child Left Behind’. They share a common understanding that the child is a ‘product’ in which the state has a vested interest. Parents can be partners in the state’s efforts to dictate the desired outcomes for a child, or an obstacle. This is described as ‘prevention’.

GIRFEC and the CYP(Scotland) Act 2014 which put it on a statutory footing establish a direct relationship between children and ‘services providers’, and the local and national agencies of the state. The connection between child welfare and family welfare is evaded or denied. A family where parents have to choose between food and fuel, rent or shoes, is a family in need. However, GIRFEC identifies such needs solely as pointers to ‘risk’.

The introduction to National Risk Framework to Support the Assessment of Children and Young People explains that:

The Getting it right for every child (GIRFEC) approach is the key thread running through policy and practice affecting children, young people and their families in Scotland. At its heart is the National Practice Model, which provides the foundation for identifying concerns, assessing needs and initial risks and making plans for children in ALL situations.

And later that: ‘At all points in a child’s/young person’s life there are identified needs and when such needs go unmet, are partially met or inappropriately met, risks may arise’.

A search of terms within the Framework finds: 45 mentions of abuse; 21 of neglect; 2 of poverty; 1 of homelessness; zero mentions of malnutrition, hunger, clothing, cold; and zero mention of unemployment or working hours or conditions of parents. Parents, and not services, are assessed and found wanting. Named persons have no power to offer resources, only ‘interventions’ in family life. This kind of ‘prevention’ is driving up, rather than down, the rate of referrals and ‘investigations’ of mainly poor families and the rate of children coming into care.

The latest Scottish Government statistics show that Scotland has the highest rate of children becoming ‘looked after and accommodated’ (coming into care) in Britain. This is ‘child rescue’ not social change.

Casework on an industrial scale is not the answer. Instead of named persons assessing and writing individual plans for every child in the country, we need a massive redirection of power and resources out of bureaucracy, assessment and ‘interventions’. The government aspires for Scotland to be ‘the best place for children to grow up’. The gap between rhetoric, benevolent intentions and hard reality will not be bridged by schemes such as the ‘Named Person’ or any other such alibis for inaction on poverty.

Maggie Mellon is an independent social worker and consultant. She writes and campaigns for social justice. An elected member of the Women for Independence (WfI) national committee, she organises WfI Justice Watch.