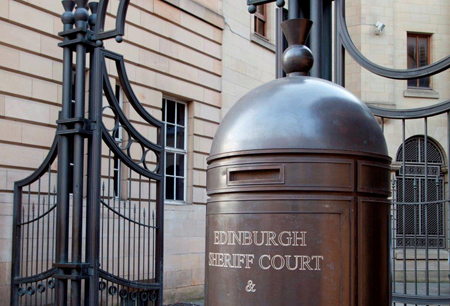 In this third part of her #JusticeWatch blog Maggie Mellon finds court more and more interesting – and depressing. Where are the social workers?

This week I did not get to visit the court until the Friday after Easter weekend. I once again found myself in Sheriff Katherine Mackie’s court. As once again she seemed to have the majority of women listed to appear before her.

It just gets more and more interesting – and depressing too in equal measure. Here are the two things that interested and depressed me this week.

Although our specific aim is to see justice as it is dispensed to women in the dock, we do also sit through a lot of justice as it is dispensed to men. It is men who are the great majority of the accused in court. And here is interesting observation no. 1: most of them seem to be under 25. Yes, I know that we all know that, and the sheriffs and the solicitors and the policemen and the court clerks, and the G4S staff must all know it even more. But you have to wonder if the whole pantomime of court: the wigs, the grandeur, the mlords and mladys, the backing out backwards, the names shouted in the halls, the solicitors bobbing up and down to confer with clients they have just met, the turnkeys, the whole cost and endless rearranging of dates and times and witnesses – is this all just to deal with the bad behaviour of young men? Some with special needs but quite a few of them working young men who had got drunk and had a fight, dissed the cops, and landed themselves in a cell one Friday night. Surely we could work out a cheaper and better way? Quicker and more relevant justice – tied to helping them mature, become role models, get recognition for their contribution to community life. Or just keep them out of trouble with football, running, cycling, till they grow out of it?

And the second thing: the disproportionate representation from people of black and immigrant minority ethnicity. There were four black young people up in the dock on Friday morning: one young woman, two young men, seemingly of Ethiopian or North African origin who were charged together, and another young African origin man. There were also at least two Eastern European accused: maybe not disproportionate if one considers that many recent immigrants are poor and therefore concentrated in the section of the population which is most likely to be processed through our courts.

Of the four women who were in the dock in the morning, two were notably disabled, and middle aged rather than young women. One had a crutch, and the other limped heavily and needed support to walk and help negotiating the very shallow step down and then into the dock. This woman had the same name as her co-accused and they seemed to be mother and daughter. They were appearing for what is called an intermediate diet which means that they are pleading not guilty and are going to trial, but there is a court date set when the PF (the prosecution) and defence confirm that witnesses have been called, statements taken, all prosecution evidence disclosed etc and the trial date is confirmed or not. And not seems to be quite frequent occurrence. You don’t hear what they are accused of, but you do get a trial date and therefore notice of when they will be up again. Maybe.

One young woman was brought up from custody having spent the night in the cells. It seemed that she had failed a Drug Treatment and Testing Order (DTTO), either by not attending for testing, or having failed the test. Sheriff Mackie was shown the test results, which seemed to show that she had mostly been attending and mostly been clean, but not all the time. She remarked that it was early days and asked if the young woman had been or could be referred to Willow, the Edinburgh health and social work project that is having great results with many women. But is still having to fight for every penny and has waiting lists – unlike the prisons!

The young woman volunteered that she was being referred to Willow via the DTTO which pleased the Sheriff, who therefore agreed to admonish the young woman and release her without further penalty until she came up for sentence on whatever her substantive offence had been later in the month.

What struck me again was that Sheriff Mackie was on several occasions in need of a solution that fitted with the vulnerability of the person in front of her. One of these was a young man with learning difficulties and perhaps a mental age much younger than his years. I would have put it at about 11 perhaps. He had been ordered previously not to go to his home town on being released on bail, but to present himself as homeless and get an address elsewhere. He had instead gone almost straight to his home, where his mother had had to arrange to have him put up in a hotel in another town. Sheriff Mackie was obviously frustrated with him but did not want to put him back in custody where he had been since the previous Saturday. The young man kept telling his lawyer that he just did not know where to go or how to go about it. Sheriff Mackie and the lawyer clearly don’t realise how frustrating and difficult the whole homeless system is (see another blog of mine about this in relation to my difficulties in getting help for young homeless man “The Line Goes Dead” in the Scottish Review March 2016). This young man was expected to get himself from the court to the homeless office in another town and get an address and inform the court of it. I somehow could not see this happening unless his mum did it for him, and she was not in the court, nor was any other relative.

It struck me that there was no social worker in the court, and if there had been, the problem would have been resolved immediately by asking that the young man be taken and steered through the process, an address obtained and the court informed immediately.

Why do we have the resources to pay for the whole wasteful process of processing and nothing for the simple things that could solve a lot of the problems and clear the courts business up. We need more social workers doing good practical things with people and not doing tick box assessments, breaches, and other unproductive things!

Justice Watch is a mass observation style initiative which will capture women’s experiences of justice in our courts in cities and towns, and bring these out to a wider audience of women. We are also watching national and local media for news about women in the courts. At the same time we intend to alert the public to the huge financial and social costs of using the criminal justice system including children who have to come into care, the loss of homes, and cost of rehousing, the impact on employment and opportunities for rehabilitation.We will be encouraging women across Scotland to take part over the course of the year, to make sure that we can cover every court in Scotland.