The ‘Named Person’ debate: The case against – Maggie Mellon 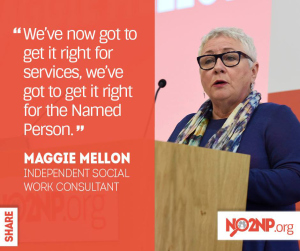 Named Person, Getting It Right For Every Child, Children and Young People (Scotland) Act
2014, parents.

My four main reasons for opposing the Named Person

My first point – where is the evidence? There is no local, national or international research evidence to support the imposition of Named Persons for all children. The Getting It Right For Every Child pilot in Highland Council did not provide any robust research evidence for ‘named persons ’,or indeed much in the way of actual research evidence for GIRFEC. The ‘evidence’ quoted is often anecdotal and much of it based on the professionals’ opinions. Claims of ‘success’ and of parental satisfaction are based on people in the mainstream services doing what they are supposed to do anyway. In fact when the resources for this whole project are questioned, the answer is exactly that -Named Person duties are just part of existing responsibilities, so there is no extra cost.Why then do we need this legislation?