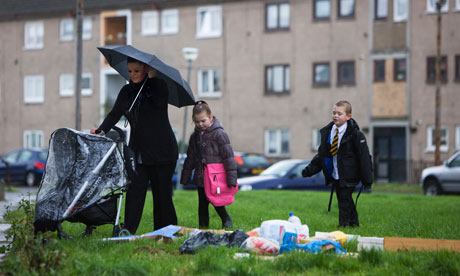 This paper by Maggie Mellon was given by her at the meeting of the Social Work History Network on Bob Holman, held at King’s College London on 30 November 2016

Easterhouse is about 6 miles east of Glasgow city centre. Building began in the mid-1950s by Glasgow Corporation. The same age as I am roughly. The goal was to provide better housing for the people of the east end of Glasgow. It was built to house over 50,000 people – a town with no amenities, no centre, no theatre, few shops.

The original population of Easterhouse was from the most deprived slums of Glasgow. A family connection – my uncle was one of them. My father and his brother and sister were brought up in poverty in Maryhill in the north west of Glasgow, and they had the bent rickety legs to prove it. My uncle Joe was married Jean, in what was called a ‘mixed marriage’. In Scotland that means a Catholic to Protestant. My Uncle Joe and his wife went to Easterhouse from a tenement flat in Maryhill, up a stair, with outside toilet. Jean had multiple sclerosis. They went to Easterhouse to a ground floor flat – not actually the solution they needed as it was accessible only by a flight of
outside stairs. Jean became trapped in the flat, where she was terrorised by stone throwing children. I don’t know if this was because she was in a wheelchair, or because she was protestant or because she was assumed to be catholic. My uncle gave up work to look after her. She died, he became an alcoholic.

Easterhouse, along with other large peripheral housing schemes (known as ‘estates’ in England) built at that time by Glasgow Corporation, came to prominence in the wider world through its social problems and became a case study for all sorts of issues: For example, the lack of basic amenities, such as shops, sports and other recreational grounds and cinemas, poor transport links. However, it was next to open country – and many now remember a childhood with lots of opportunity to roam freely and play outdoors safely.

Housing was mainly of the two/three bedroom tenement type, off a common close. Called a six or eight in a block. In this they echoed the slum tenements but without any stable pre-existing community or employment round them. No reason for this tenement style – maybe it was to make the new residents feel at home. But basically Glasgow Corporation exported poverty with these vast schemes – and along with poverty, there was sectarianism, ill health, and unemployment, all relocated to six miles out of town. Families and communities were separated in the process.