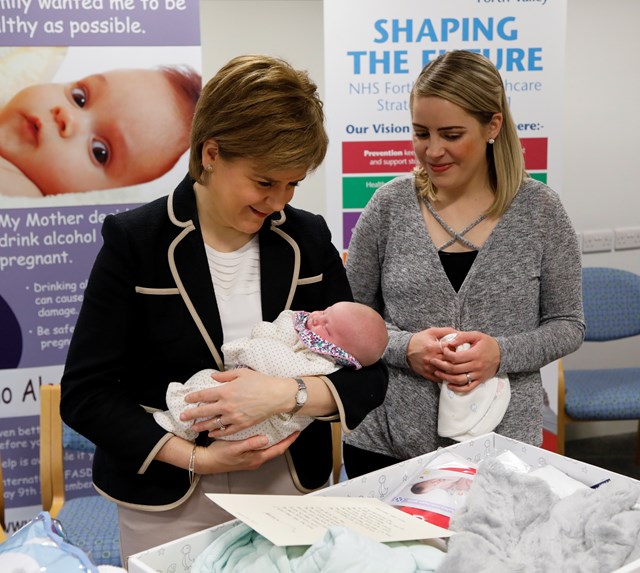 In many ways the baby box provision can be understood as a heart-warming initiative here in Scotland at a time when the ‘nasty party’ in Westminster seems to be intent on destroying everything universal, and free and civic and kind.

What’s not to like? Who is not a little proud of or even just simply relieved to have a government that seems to care? It seems curmudgeonly to cry ‘Bah Humbug’, or even to question whether the relatively few £millions (a piffling percentage of that wasted on Edinburgh trams) could have been better spent.

And indeed perhaps they could on ‘evidence-based’ initiatives which sorely need the funds, and are set to close in the coming health and local authority budget round.

But perhaps too  we should treat what is in effect a gesture towards the virtues of universalism as a question being asked of us, the citizens of Scotland.  Do we support the expansion of universal services? Do we want to see all citizens afforded the right to high quality and equalising services via progressive taxation?

If so, that means demanding higher taxation.  This demand has been resisted by the SNP government on the not unreasonable basis that it risks losing them necessary support. Calls for the government to use their tax-raising powers have been met with protests that these powers are such that an extra 1p in the £ has be inflicted across the board, on the low-paid as well as the rich.

Firstly, that ignores the power that the Scottish Parliament has to agree a wealth tax which would raise money on the basis of land ownership, private wealth, not taxation on the basis solely of declared income: which the rich and their corporate interests have proven themselves so adept at avoiding. So let’s argue for a wealth tax.

But it can also be argued that lower-paid workers would be better off paying a penny more on their taxable earnings, if that additional taxation ensured they would avoid the otherwise inevitable loss of free libraries, subsidised leisure charges, school meals, bus fares, and other savings. There is an argument to be made that the lower paid would gain more from a penny in the £ tax than they would lose.  And there is also the attraction of being able to fund the ambitious principles that are being embraced by the Social Security Minister Jeanne Freeman in consulting on how best to use the extra social security powers: strengthening the safety net and allowing the Scottish Government to protect  the most needy from the coming savage cuts to housing and other benefits.

Cynics might argue that the baby boxes are not pointing to the benefits of increased universalism but are instead a proxy measure, which proclaims social democratic credentials without having to actually upset any vested interests.  And that once again the middle classes are getting a perk they don’t need, while the needy are taking children ‘home’ to insecure private sector tenancies, with pay-as-you-go meters, sanctioned for missing pointless job centre tasks, and looking to a future for their children even bleaker than their current situation.

But better to light a candle than curse the darkness.  And in these grim times, the boxes are a wee candle lit. Let us light a few more candles. If it is baby boxes for all as a sign of our equality, let it be free fuel for all, free transport for all, citizen’s income for all, free school meals, shoes and coats for all. If the aim is the best start in life for all of Jock Tamson’s bairns, then why not? What would stop us?