An Open Letter to John Swinney On Named Person 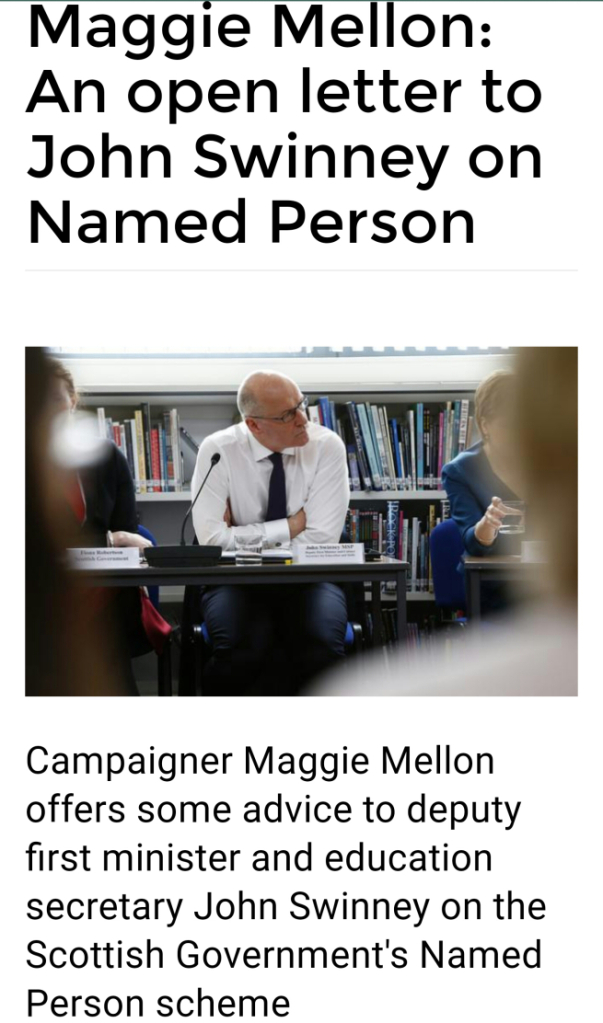 You have asked for engagement on the future of the Named Person following the ruling of the Supreme Court.

The Supreme Court ruled the information sharing provisions unlawful and also cautioned that parental or child consent to share personal information should not be obtained by the threat of any possible consequences.

Your decision to decline to engage with anyone who had opposed the Named Person law in principle and not just in part means you intend to rely mainly on the advice and suggestions of those who advocated for what was at the very least a badly drafted law, and who mistakenly advised that it was both legal and in accord with the government’s stated intentions.

I am asking that you do consider this letter despite my opposition to the law in its entirety.

I have worked with children and families for over 40 years in a range of paid and voluntary employments and I have absolutely no pecuniary, political, or career considerations in taking the stand that I have, and in offering this advice.

The solution to the problem facing the government seems to me to be quite simple. That is, that any new arrangements should be in line with the government’s own stated aims for the law and for the pilot schemes operating. One of the problems that the government has had with ‘selling’ the Named Person provision is that most of the explanations given by government and its supporters were not reflected in the legislation.

The solution is therefore quite simple – make any provision in line with the stated aims.

“Most children and young people get all the help and support they need from their parent(s), wider family and community, but sometimes, perhaps unexpectedly, they may need a bit of extra help.

“Many parents say that when they need help it’s not available and they don’t know who to go to. The Named Person ensures that there is someone who is responsible for helping them get the support they need if and when they need it.

“Children and young people from birth to 18, or beyond if still in school, and their parents will have access to a Named Person to help them get the support they need.

“A Named Person will be a clear point of contact if a child, young person or their parents want information or advice, or if they want to talk about any worries and seek support.”

These intentions make it clear that any revised scheme should be voluntary, not compulsory. The government has always insisted that the law was developed in response to parents’ requests. It is true that parents of children with special needs have been asking for many years to have a single point of contact within the services that are meant to be helping them.

However, what was created by the legislation, and what has been happening in practice was not a point of contact for parents and families, but about them. This difference between the legislation and the government’s explanations of it has caused much confusion and at the same time has allowed services to avoid accountability rather than be held accountable.

Instead, many parents report feeling that they feel that it is they who are being held to account by service providers often on the basis of flawed and subjective judgements.

The prevailing understanding among service providers seems to be that it is parents and not services which need to be improved. Parents report being warned that their child’s Named Person will be informed of their child’s lateness to school, or of any failure to keep health appointments.

These are public messages to all parents, apparently motivated by the idea that this behaviour will somehow improve family wellbeing. On the contrary, it is not only intimidating, it is also infuriating.

The vast majority of parents are usually much keener to defend and promote their children’s wellbeing than any service provider. Many parents have also discovered that private and confidential information about their intimate personal and family lives have been shared quite unnecessarily among a range of strangers.

This damages trust, and means that parents and children become reluctant to risk asking for help, as they fear the consequences. We now have the dangerous situation that ‘professionals’ or ‘child concern’ meetings are being held about children without their parents’ knowledge.

This is continuing to happen despite the Supreme Court ruling. It seems that the practice and the unfortunate culture that the Named Person powers encouraged, have become established.

The excuse that this is in any way connected to child protection does not wash as there are already very adequate laws to protect children from risk of, or actual, significant harm.

‘Improving wellbeing’ is not a legitimate reason to act without consent, and should never have led to what is in effect an effort at the compulsory risk management of every family in the country.

This is not prevention, it is investment in all the wrong things at a time when family support services are closing. This growing culture of blame and monitoring needs to be replaced by a practice based on transparency, respect and trust.

If there is a need for additional legislation to improve the wellbeing of children, I suggest that would be with the explicit aim of ensuring the accountability of service providers to families – and not of families to service providers.

Legislation which meets the Supreme Court ruling and also the government’s stated intentions could be drafted to include the following points:

– Service providers will meet the needs of children and their families in a preventive and supportive way, without unnecessary intrusion, duplication, disproportionate bureaucracy, or ‘cost shunting’ onto each other, or onto parents.

– If the government remains determined to continue to use the rather Orwellian title of ‘Named Person’ it should be made clear that their purpose would be to act as advocates for children’s best interests within services. This would be guaranteed by ensuring that any such persons should be supervised and regulated independently in order to avoid any actual or apparent conflict of interest between their primary duty to children and families and any duties to their employers.

– Where service providers in consultation with parents in their area agree that their accountability to children and families will be best achieved by the provision of a ‘Named Person’ from within their staff, they will ensure that any such staff are suitably qualified and trained, understand and respect human rights, child development, and family life.

– Parents will be offered choice and will be able to keep the same trusted advocate across time and services. Advocates will have sufficient authority to ensure the cooperation of their own and other services in agreeing and meeting need.

– Parents of children with special or additional needs, or parents who themselves need practical and other supports as a result of disability or illness, should be key partners in the evaluation and management of any such service. There should be a review of any such arrangements at least every three years, and a national comparison of approval ratings, and other outcome measures.

These suggestions seem to me to describe the service that the government wants the Named Person role to provide, and would provide necessary safeguards which will promote trust and respect between families and service providers.